Once upon a time, Jewish groups committed terror acts very similar to the ones perpetrated until recently by the Palestinians, complete with charred vehicles, body parts scatterd all over the sidewalk, etc. This creates a problem for the Zionists, since "nothing, but nothing, can justify terrorism." In order to rationalize the acts of those Jewish murderers, three basic claims are made. As far as I know, they have never been debunked simultaneously in one and the same article. Here we go, thus:

Claim #1: Only the Irgun and the Stern Gang resorted to terror. The Haganah, which was the mainstream Jewish resistance group, didn't.

This is a departure from established fact, or, euphemisms aside, a lie. The Haganah committed numerous terror attacks, sometimes in reprisal for Arab bombings, but always killing innocent civilians. Here you can access the archives of the Palestine Post (today's Jerusalem Post); in the January 6, 1948, issue you'll find the following article (CLICK ON IMAGE TO ENLARGE): 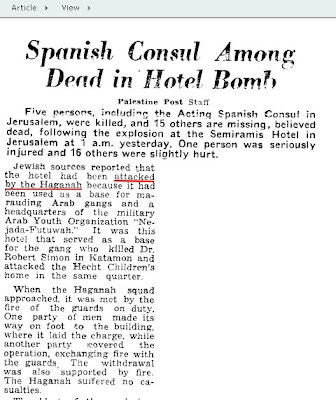 If you browse the following day's issue of the newspaper, you'll find out that at least 10 people were killed in that Haganah terror bombing, including a boy aged 15, the hotel owner's son and two Sudanese waiters (talk about Darfur). (You will also find the British authorities' denial that the hotel had been given any military use by the Arabs.) You can find many more examples of Haganah terrorism in this book.

Claim #2: Jewish terror was mostly directed against British and Arab military objectives, and did not intend to kill civilians.

This claim exploits the fact that the best-known Jewish terror attack is the one on the King David Hotel, where the Headquarters of the British Forces in Palestine and Transjordan were located. First of all it must be noted that of the 91 victims, only 22 were Britons, so that the overwhelming majority were innocent civilians, including 17 Jews. But even if the intention of this particular attack was to harm the British military, most attacks carried out by the Irgun and other Jewish terror groups targeted Arab civilians. Here's one example: 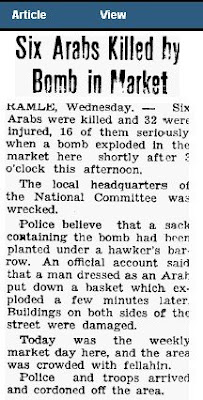 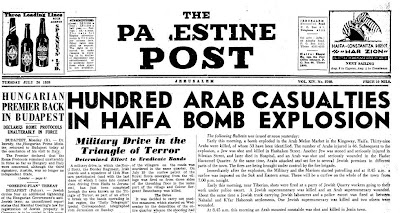 Yes, Jewish terrorists WANTED to randomly kill civilians. These were not collateral damage.

Claim #3: After Israel's independence, Israelis who had engaged in terrorism paid a heavy price for their acts and were marginalized from the country's political scene for several decades.

I don't need to present any evidence to debunk this claim, because it's an assertion, and the burden of proof falls on the one who affirms something, not on the one who denies it.

Yes, Menachem Begin, one of the most famous Jewish murderers, wasn't elected Prime Minister until 1977. But what evidence is there that he wasn't elected because of his terrorism against the Arabs? Peoples don't decide their vote out of empathy for other peoples, much less their enemies. There is a much simpler explanation: Israel was established by European Jews who were politically left-leaning. They created an all-powerful labor federation, the Histadrut, through which jobs could be obtained, since it controlled most industries. And handing out jobs is a great way of getting votes. Israel became thus a hegemonic-party state, like Italy under the Christian Democrats, or Japan under the Liberal Democrats.

Only when the impoverished Sephardi population, who didn't benefit from the Histadrut pork barrel, grew to outnumber the educated, well-to-do Ashkenazi sector did Begin's rightist, populist discourse take hold among the electorate.

The reality of Jewish terrorism will continue to haunt the Zionist camp. No matter how hard they try to spin it, it was terrorism, it did target civilians, and while it in no way justifies Hamas terror, it proves that Palestinians are no more evil than other peoples who believe themselves morally superior.
Publicado por Ibrahim Ibn Yusuf en 4:26 PM

Superlative post, Ibrahim! Of course the Zionist terrorists weren't really terrorists. They were freedom fighters acting in a noble, historic cause. It's not even a problem for the hasbaristas that they called themselves terrorists and were acknowledged as such at the time. Memories are short and people remember what they like. Confronted with evidence of the kind you've gathered here, once again, their mind's made up - don't confuse them with the facts. I just hope it doesn't take another Gaza to wake people up, but fear it will take many more.

All these bombings in the 'Empty Land', makes you wonder...

Of course they were Freedom Fighters, ferYHWH's sake, they were liberating the land of Palestine, to fulfill thousands of years of Righteous Jewish Yearning. Ask Yehudi from Brooklyn, sorry, I meant Sderot, now happily living in his New Judean Style maisonette, he'll tell ya...

Jokes aside, it's important to keep the memory of these events alive, as Zionism gets away with truth inversion all too easily... This post is spot on. And you're now on my blogroll (reciprocating and much obliged).

So how come the Jews are so smart, so ancient and so wealthy, Ibrahim? How come Christians and Muslims worship our God and obey our laws? And why are the most important figures of the 19th and 20th century are mostly Jews (Marx, Freud, Herzl, EInstein, etc) ? How come we're so much better than the goyishe nationa? Please tell. And then go get your fucking shoe shine box.

I shouldn't respond but it's irresistable.

Here's what one of the most important Jews of the 19th/20th century had to say on the Jewish question:

About two years ago I wanted to solve the Jewish Question, at least in Austria, with the help of the Catholic Church. I wished to gain access to the Pope (not without first assuring myself of the support of the Austrian church dignitaries) and say to him: Help us against the anti-semites and I will start a great movement for the free and honorable conversion of Jews to Christianity.

That's from page 7 of the first volume of Herzl's diary. I'll type more if you're interested.

I think this anon is an impostor, 'phishing' for anti-Semitic reactions, if you ask me...