Talkback Policy Our aim is to provide the worldwide readership of The Jerusalem Post with a platform for lively but good-tempered debate. We do not tolerate abusive language, and such talkbacks will be rejected.

-  Priority is given to talkbacks that are brief and topical

- Comments posted by registered users will be posted automatically, as long as they do not contain racist or libelous content or incitement to violence

- Guest comments are posted only after approval by our moderating team

- Talkbacks may be edited and shortened

To report service abuse, simply flag the comment in question.

(Emphasis mine.) What should we make, then, of the following comment? 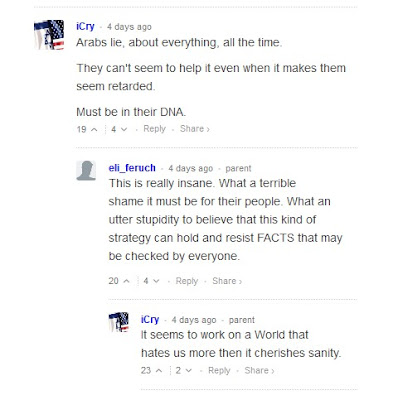 My opinion is that we shouldn't make much. Despite its declared policy, I don't think the Jerusalem Post should police all comments published on its talkback. Widespread censorship ends up harming minoritarian views much more than majoritarian ones.

The fact, however, that such a blatantly racist comment has stood for 4 days without being flagged, and that it was praised by 19 people (against just 4 who opposed it), speaks volumes about the Jerusalem Post's readership, whose opinions, as far as I know, are fairly mainstream by Zionist standards.

But that is not the point I'm trying to make. The point I'm trying to make is that whenever comments containing setereotypes about the Jews are published in, say, The Guardian, Zionists declare the news outlet to be antisemitic for failing to purge the offensive text. The same behavior is not expected from papers that publish much cruder stereotypes about the Arabs or Muslims. This is part, of course, of an ongoing double standard, whereby the Jews are more entitled to protection against hate speech than non-Jews. Which is tantamount to bigotry against many people, not least among them the Jews themselves.
Publicado por Ibrahim Ibn Yusuf en 7:43 PM 6 comments: