Polls that matter and polls that don't matter

OK, so the United States has killed Osama Bin Laden and thrown his body into the sea. A highly symbolic development that gives Barack Obama some much-needed oxygen. For the record, I fully reject the killing of civilians and am totally against Osama's methods and activities. However, I believe he wasn't nearly as important now as he used to be; killing him wasn't my top priority. I also believe that disposing of his body the way the US did was childish and unwarranted; and that the cause of anti-terrorism would have been better served if he had sat before a tribunal to face charges of crimes against humanity. That being said, having him convicted by a court of law wasn't my top priority either.

But the Zionists are taking advantage of his death to remind us that Palestinian Muslims were the most ardent supporters of Osama. This is the inculpatory evidence: 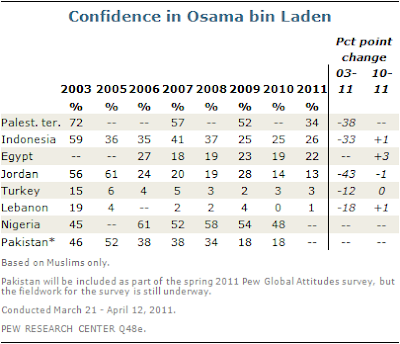 These figures would indeed be worrying if they had any relevance at all. When Palestinians are asked about Al Qaeda or Osama Bin Laden, words are, to a large extent, being put in their mouths. It's not like they are spontaneously demonstrating in favor of Al Qaeda. Osama is, was, a reality far removed from theirs, almost a construct. Saying that they had confidence in him is irrelevant insofar as most Palestinians, an overwhelming majority, had no chance of translating that declared confidence into a concrete support for Bin Laden. Even more importantly, those who did have that possibility --the Palestinians who managed to travel and settle abroad-- did not enroll in Al Qaeda. Indeed, Stanford's Martha Crenshaw, one of the foremost scholars in terrorism studies, has noted that there are "almost no Palestinians in al Qaeda and no proven links with Hamas or the other Palestinian groups that use terrorism against Israel." So when the Palestinians are asked if they have confidence in Bin Laden, their answer must be seen as a manifesto against the West that has so often betrayed them. Essentially they are telling the Western pollster "I'll say what I know that will irk you." If they meant it, they would have joined Al Qaeda in large numbers.

Now this must be compared with other polls about concrete matters and events the respondents can take an active part in. Case in point, the one published by Ynet on 15 Dec 2010, after more than 50 top Jewish religious figures signed on to an anti-Arab racist letter:

Poll: 55% back rabbis' anti-Arab ruling
Survey shows 41% of secular Israelis support municipal religious leaders' call not to rent apartments to non-Jews, as do 64% and 88% of Israel's traditional and haredi Jews, respectively.

This kind of support is not speculative or theoretical or pure blah-blah. Many of the respondents are Jews who do own apartments and who, in 55% of the cases, would not rent them out to Arab tenants. And they don't stop there; they're also taking positive steps to oust Arabs from apartments owned by other Jews. But it gets worse. Shortly after the ruling, racist Jews threatened a Holocaust survivor --a Holocaust survivor!-- with the burning of his house if he didn't stop renting rooms to Arab students. For all the Yom Hashoah (Holocaust Day) commemorations, with the sirens sounding, the cars stopping in the roads and the deeply moving 2-minute silence, the crude fact is that Jews in Israel hate Arabs more than they love Holocaust survivors.

In short, the polls showing an apparently outrageous Palestinian support for Osama are basically meaningless and reflect an exercise in épater le bourgeois, since Palestinians are not rushing to join Al Qaeda. The polls showing a deep Jewish racism against Arabs, on the other hand, reflect a hate that is translated into very real actions of arson, threats and attacks against both Arabs and non-prejudiced Jews. And that matters much more than mere words.
Publicado por Ibrahim Ibn Yusuf en 5:11 PM 16 comments: