I respect blogger Norman Geras because of this post. That said, most of his blog consists of more or less crude Hasbara, but the fact that he seems to enjoy a certain degree of prestige justifies taking an occasional look at, and duly criticizing, the contributions he publishes.

One of Geras' guest writers is British professor Eve Garrard, who in her latest post takes on writers Fintan O'Toole, from Ireland, and Iain Banks, from the UK. OK, none of these people is particularly famous as a Middle East commenter, but I'm concerned about arguments, especially when they're often repeated in essentially the same form. Garrard:

Fintan O'Toole thinks that Israel regards itself as 'exempt from the demands of common humanity' (via Z Word Blog). Iain Banks thinks that 'simple human decency' means nothing to Israel (see this normblog post).

Not what either author said, and here we've got one basic Zionist tactic: slight misrepresentations that change a lot the "outrageousness" of a statement. As can be checked by following the links, O'Toole says:

Once you decide that your group is especially exempt from the demands of common humanity, there is virtually no limit to what you will do to others. Lanzmann shows, through a slow accumulation of banal detail, the ways in which the attempted extermination of an entire people became normal.

His assertion is about the Nazis, not about Israel. He goes on to reflect, accurately, that because of the Jews' genocide, Israel prioritizes security over a fair treatment of the Palestinians, and adds:

In Israel itself, the tension between the two imperatives (safety and common humanity) has gradually weakened.

Which is a far cry from stating that Israel has declared itself beyond common humanity concerns.

Banks, for his part, states:

[A]ppeals to reason, international law, UN resolutions and simple human decency mean – it is now obvious – nothing to Israel[.]

It is the appeals, not the decency, that mean nothing to the self-called Jewish state.

Having slightly, but importantly, misrepresented both authors, Garrard proceeds with her criticism:

Two well-known writers, very anxious to tell the world that Israel lacks humanity. Israel's not like the rest of us, the rest of the human family. Compared to other nations, it's inhuman.

This is not a misrepresentation; it's a lie. Neither author compared Israel to other nations. This is Zionism's big straw man: the claim that because we antis (anti-Zionists or antisemites; I don't care what they call us) criticize Israel and only Israel we're implying that the country is the only human rights violator in the world. It's like claiming that physicians who only treat AIDS patients are in denial of the existence of malaria.

Garrard goes on with an all-too-familiar littany:

Sri Lanka, at the same time that Israel was fighting in Gaza (around 1300 dead) killed about 25,000 of its own civilians in the course of repressing an insurgency. But Israel thinks it's exempt from the demands of common humanity.

Sudan has killed something in the order of 200,000 people in Darfur, with countless rapes and tortures alongside. But Israel lacks simple human decency.

Congo: what can one say about Congo? More than that 5 million - 5 million - people have been killed in its wars, alongside innumerable rapes and hideous tortures? But Israel lacks simple human decency.

These counterexamples are fallacious. Zionists complaining that Israel is more slammed than Congo is like Tiger Woods complaining that his extramarital affairs are more exposed than his next-door neighbor's. Israel is famous and Congo is not, and if Garrard doesn't like fame to be a fundamental attractor of attention she should criticize human nature, not anti-Zionism. (By the way: so concerned as she is with the Congo genocide, has she ever penned any reflection on how all those Holocaust museums haven't helped prevent other mass killings?).

Her other examples are more relevant:

Now, here's one especially for Iain Banks: the USA and the UK initiate a war in Iraq in which more than 100,000 Iraqi civilians are killed. But Israel thinks it's exempt from the demands of common humanity.

France trained and armed the Hutu genocidaires who killed around 800,000 civilians in the Rwanda genocide, and continued to protect them even as they lost power to the incoming Tutsis. But Israel lacks simple human decency.

But they're also fallacious. In the first place, Israel can consider itself exempt from humanitarian concerns and lack simple human decency even as other famous countries are worse offenders in either area. Even if Bank's and O'Toole's argument had been what Garrard claims it to be, there would be no contradiction.

But in the second place, Garrard speaks as if there was nothing distinguishing the case of Israel from that of other advanced economies that also violate or help violate human rights. Which, of course, is not true. Israel's oppression of the Palestinians is unique as it displays three simultaneous features:


OK, whenever you use bullets you've got to explain each bullet (exception: the Israeli Defense Forces). So here we go. Israeli oppression is ongoing. It is, thus, different from France's support of the Hutus, which is horrible and regrettable but, in the end, past history.

Israeli oppression is systemic. Israel needs to devour ever more Palestinian land and resources to keep its system going. It also needs to deny the Palestinian refugees any measure of justice. It futher needs to control West Bank Palestinians while denying them the vote. It even needs to deny its own Arab citizens, described as present absentees, the right to recover the property that was confiscated from them by the State. In all this Israel is different from, say, the United States. Granted, the US killed far more people with Napalm in Vietnam (or in the current Iraq war) than Israel has in all its wars. But the Vietnam war ended in defeat and the American system didn't fall apart. Zionist Israel, by contrast, would collapse if West Bank Palestinians were given the vote, or if the lands on which the highway from Tel Aviv to Jerusalem was built (for instance) were restored to their Palestinian owners.

But finally, and very importantly for an intellectual, Israel is apologized for. It's not just that the system has created a racist country; it's also that such racism is defended by an army of writers, pundits, lecturers and bloggers. And it's an unconditional defense based on outrageous falsities, like the claim that Israeli soldiers put their lives at stake to prevent civilians from being harmed. Other countries' wars are occasionally defended too, but not with such insistence or with such egregious lies. You don't see commentators supporting Russia's onslaught of the Chechens with the argument that Russians never targeted civilians.

But as Garrard would have it, intellectuals should focus on the human rights violations that are undisputed, rather than on the unique case in which a horde of dishonest authors with polished arguments are trying to convince the world that black is white, up is down and Israel is a light unto the nations. She simply doesn't get the basics of intellectual pursuit.
Publicado por Ibrahim Ibn Yusuf en 4:50 PM 271 comments:

The Israeli Jews' sudden solidarity with the Armenians

Belatedly --but better late than never--, Israeli Jews are beginning to acknowledge the extermination of over 1 million Armenians at the hands of the Ottoman Turks in 1915-18. At a Tel Aviv demonstration Monday night, they event went so far as to compare the events to the sacrosanct Holocaust: 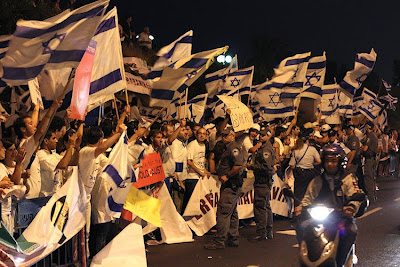 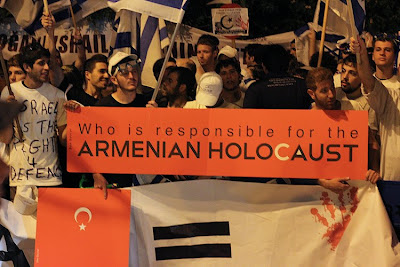 Cynics are claiming, though, that those Jews never gave a damn for the Armenians and nor do they now, and that they're just using them to bash Turkey for its support of the Gaza flotilla.

But this is antisemitic, since the demonstrators have also called for the resignation of their own president, Shimon Peres, over his 2001 denial of the Armenian genocide.

There are several aspects to Israel's assault on a Gaza-bound flotilla with humanitarian aid yesterday that left about 10 civilians dead. The least important one is whether the attack was technically legal or not. It is unimportant for the same reason that it is irrelevant whether the Chinese repression on Tiananmen square in 1989 was done within or beyond the boundaries of the law. What is most relevant is, in both cases, that the tragedy was a corollary to a history of major human rights violations. Curtailment of freedoms and harsh repression of political dissent in one case; the inhumane, pointless and grotesque siege of a defensless people by a nuclear power in the other.

Regardless, Zionist bloggers have been working overtime to revive obscure pieces of wartime legislation buried here and there, or to undig this or that article in the naval code of country X, to defend the indefensible, namely an attack on an unarmed ship in international waters.

Others, like Shmuel Rosner at the Jerusalem Post, have taken a different approach, bringing up the Jenin "massacre" reports to tarnish all and any critic of Israel, as though the fact that a lie was disseminated (possibly by the IDF in the first place) in 2002 could offset the satellite images showing an attack that took place outside the territorial waters of Israel. This is part of a troubling trend of Zios copycating Holocaust denial techniques (a single Holocaust lie, like that the Nazis made soap from Jews, proves that the Holocaust itself is a lie; a single bogus Holocaust survivor, like Binyamin Wilkomirski, proves that all survivors are impostors).

Still other Zionists indulge in unrestrained self-victimhood. "Israel is slammed for the attack because the world is biased against Israel" (as proven by the recent, unanimous approval of the country's entry into the OECD). A Yediot Ahronot (Israel's leading newspaper) article is titled A brutal ambush at sea! You know -- if you break into my house and I hit you with a bat I'm ambushing you. I don't recall meanings being twisted so amusingly since "present absentee." Come on, why stop at "ambush"? What those people on the boat did was a downright pogrom! Or, better still, a Holocaust! Don't dare deny it or you'll be a Holocaust denier.

But the most striking feature here is the masturbatory nature of these Zionist efforts. They know their endless posts quoting self-appointed military experts will make next to no impression on the general public because:


I.e., there are too many common-sense issues to be counterbalanced by a purely legalistic approach. All the same, they publish the posts. I agree that the internal front is important, and that convincing others involves in the first place convincing your own troop. But the whole thing is so pathetically overdone that it amounts to preaching to the convert. For the arguments to have any efficacy, they would have to be used by someone mainstream, which, in turn, would require for said arguments not to be ridiculous. But Zionists often confuse "I can make a case for Israel, albeit ludicrous" with "I can make a winning case for Israel."

Much to their chagrin, more gigs will be cancelled in Tel Aviv, more Israeli professors will be disinvited by foreign universities and more countries will become forbidden land for Israeli war criminals. They'll say they don't give a damn because so far BDS hurts very little. But with actions like the attack on the flotilla, that small amount of pain is set to increase rather than diminish.
Publicado por Ibrahim Ibn Yusuf en 3:01 PM 18 comments: