An article's title can convey either its subject or its thesis. Thus, the title of Shaul Rosenfeld's recent Ynet story "Israel's shameful Arabs" can be inerpreted as meaning "this article will deal only with those Israeli Arabs who are shameful" or "the thesis of this article is that Israeli Arabs are shameful." Let's assume, for the sake of argument, that the former is meant (although you and I know that a story titled "The US's exploitative Jews" would not enjoy the same benefit of the doubt).

The article targets Israeli Arab lawmakers, whom Rosenfeld finds to act, well, shamefully. Ahmad Tibi, a member of Knesset best-known for having coined the catchphrase "Israeli is democratic and Jewish: democratic for the Jews, and Jewish for the Arabs," is slammed in the first place for having stated:

The shahid is honored throughout the history of nations. He is the one who blazed the trail for us. No value is more noble than martyrdom... Israelis are ignorant with regards to the term 'shahid' and misunderstand it. It refers to anyone who was killed by the occupation for the homeland or died for a national cause.

The shahid is a martyr, and it is well-known that all countries have martyrs whom they venerate. Since Tibi makes no mention of any particular martyr, we don't know if he's including terrorists among their numbers. "A national cause" may include killing civilians, but since he doesn't explicitly say so, he enjoys plausible deniability, which is all that counts in the eyes of Zionists.

I have a hard time understanding why Rosenfeld finds this outrageous. Israel honors the terrorist David Raziel, who masterminded the murder of scores of innocent Arabs with bombs in markets. As his admirer Meir Kahane described:

On July 6, 1938, time bombs were put in milk cans and placed in the Arab market place in Haifa by an Irgun member dressed as an Arab porter. In the explosion that followed, 21 Arabs were killed and 52 wounded.


Two days later, the Irgun threw a bomb into a crowd of Arabs waiting near the bus terminal near Jaffa Gate; three were killed and 19 injured. A week later, on a Friday, as Arabs left their mosque at the foot of David Street in the Old City, an electronically detonated mine went off killing 10 Arabs and wounding 30.


On July 25, 1938, a 30-kilogram explosive went off in the Arab marketplace in Haifa. Hidden in a barrel of sour pickles, it killed at least 35 Arabs and wounded 70 more. The Arabs were terrified; the Jews were hysterical. Raziel was content.


One month later, the Irgun switched to Jaffa, a nest of the worst gangs of Arab vipers in the country. An Irgun member, once again dressed as an Arab porter, placed a bomb in the Arab Dir-a-Salach marketplace. The official version listed 21 Arabs dead and 35 wounded. In reality many more went to Islamic heaven.


February 27, 1939, proved to be yet another "Black Day" for the Arabs as the Irgun, sensing the impending collapse of Arab terror in the face of Jewish vengeance, attacked three cities. In Haifa, two powerful explosions went off, one at the ticket window of the railroad station in East Haifa and the other at the Arab marketplace. At least 27 Arabs were killed. Half an hour later, in Jerusalem, three Arabs were killed and six wounded in an
Irgun explosion on David Street, while another died after being attacked on an Arab bus passing Mahane Yehuda.


Finally, in Tel Aviv attacks on Arabs near the power station in the north and in the Salama district in the south killed three more.

But Raziel has been thoroughly rejected by Zionists, hasn't he? Er no; let's read on:

David Raziel was a terrorist, a murderer who went against everything that was "Jewish." Today, one may visit a settlement due west of Jerusalem named Ramat Raziel and live on Raziel Street in East Talpiot in Jerusalem. One may hear talks on the glory of Raziel and see mementos of him at the Herut headquarters on King George Street in Tel Aviv and may look up paeans of praise of him from the speeches of Yitzhak Shamir, Menachem Begin and Moshe Arens.

So that Tibi honors the shahids, but we don't know exactly what people he's talking about. On the other hand, the Jews of Israel honor Raziel, whom we know to have been a monstrous Jewish terrorist who killed countless civilians. What's the problem?

Rosenfeld goes on to bash Hanin Zoabi, another Israeli Arab MK, along with other unnamed ones. He claims:

These Arab MKs also board various Gaza-bound ships or visit Hamas leaders or enlightened Arab rulers such as Gaddafi, may he rest in peace.

This is in line with the article's lede, which states "Arab parliamentarians endorse tyrants, terrorists while slamming 'undemocratic' Israel."

One has the right to slam an undemocratic country, even as one visits undemocratic leaders. It's called freedom of conscience. But if you think one doesn't enjoy that right, then you must be consistent. You must never have made friends with dictators.

And here's where file photos come in handy. 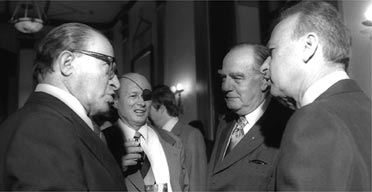 Rosenfeld would have been better advised to take a legalistic approach, such as "visiting Lybia was illegal." But since he tries to slam Arab lawmakers citing moral considerations, his attempt fails miserably, because he's throwing rocks from a glass house, and a very thin-walled one at that.
Publicado por Ibrahim Ibn Yusuf en 2:53 PM

Does your scrap book detail the Argentinean Navy’s extensive co-operation with the (apartheid) South African Navy?

And I’m not talking about the 30,000 murdered at the Navy Petty-Officers School of Mechanics - ESMA
http://en.wikipedia.org/wiki/Navy_Petty-Officers_School_of_Mechanics#Human_rights_violations

July 22 1969
“Just about the same time, Argentina ran into trouble with the Africans over her joint naval maneuvres with South Africa, held earlier that year”
“Despite Argentine protests these naval maneuvers were taken as proof that Argentina was in basic sympathy with South Africa’s apartheid policy.”
http://news.google.com/newspapers?nid=757&dat=19690722&id=MpZOAAAAIBAJ&sjid=o0cDAAAAIBAJ&pg=6051,1533553

FLAG-SHOWING CRUISES BY SOUTH AFRICAN WARSHIPS,
“24 October 1967, the frigates SAS President Kruger and President Pretorius, along with the replenishment ship SAS Tafelberg (built as an oil tanker in Denmark, from 1957-1959, and commissioned as a replenishment ship for the SAN on 10 August 1967) left for South America where they participated in naval manoeuvres with the Argentinian Navy.”
“In 31 January 1978, the warship left Simon's Town to lend support to a krill research project of the Department of Fisheries. This project took the Protea into the South Atlantic Ocean, and this was the first time that an SAN vessel sailed around Cape Horn, through the Beagle Channel to Ushuaia in Argentina. Next, the vessel sailed to Deception Island (part of the British Shetland Islands), Grytviken (on the British South Georgia Island), and Puerto Belgrano (Argentina).”
http://www.navy.mil.za/aboutus/history/ambassadors.htm

These joint maneuvers continued right up until the Falklands Islands War, when Argentina broke off diplomatic relations because apartheid South Africa wouldn’t support them!

To the bottom of the ocean

at the behest of the arab league and in the name of african and third-world solidarity, sub-saharan africa broke relations with Israel in the early 70s. they did this, in many cases, with regret and though bilateral relations had been good. Israel was deserted by africa. south africa was willing to cooperate with Israel. anyone who criticises this position should be prepared to condemn allied and british cooperation with the ussr during the second world war. and, more recently, no one has much of a problem with states (under no particular pressure, ostracism. etc.) dealing with odious dictatorships around the world. and, even those few who are actually troubled by this don't call into question the legitimacy of any of the cooperating countries...except in the case of israel: israel's alleged transgressions are always presented as the basis for challenges to the legitimacy of jewish statehood.

this blog regularly upbraids defenders of israel for insisting that israel be judged in context, not in isolation, not with reference to some utopian ideal form. but that is the only way that any nation can be fairly judged. if there were tens of millions of refugees that were resettled after world war ii, that is an important fact. if populations were resettled all over europe and east asia, that is important to know. if, in the post-war world, there were population exchanges between greece and turkey and india and pakistan, that is important and it has a bearing upon the way that arab-israeli relations must be viewed.

btw: the map showing combined "palestinian" and public ownership of land is intended to be deceptive and it is. public lands were not more arab than jewish, in fact, they were less arab by virtue of the fact that the entire area is part of israel's historic patrimony, the site of ancient and sustained jewish habitation for millenia...a long time before the arab/muslim military conquest of the land.